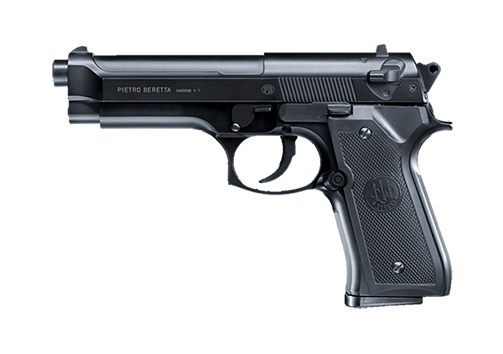 The Beretta Model 9 is a semi-automatic pistol chambered in 9mm.

The M9 is the civilian version of the US military issued pistol. It is almost exactly the same as the M92 except it has distinctive military markings on the slide. Otherwise, it has an open slide design, so the barrel shows through. It has an external hammer that when cocked back changes the trigger pull from a double-action (long pull) to a single-action (short pull). An ambidextrous safety positioned also acts as a de-cocking lever and when pushed down it rotates the firing pin out of alignment. A second safety feature is its visible automatic firing pin block, which prevents the pistol from discharging if accidentally dropped.