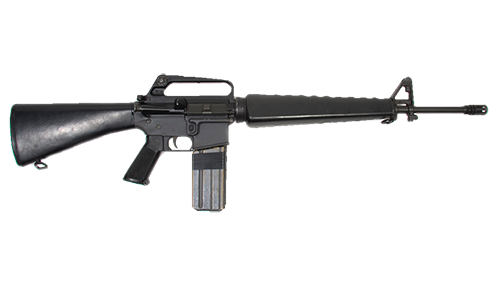 The M16 rifle, officially designated Rifle, Caliber 5.56 mm, M16, is a United States military adaptation of the Armalite AR-15 rifle. The original M16 was a select-fire, 5.56×45mm rifle with a 20-round magazine.

In 1964, the M16 entered American military service and the following year was deployed for jungle warfare operations during the Vietnam War. In 1969, the M16A1 replaced the M14 rifle to become the U.S. military’s standard service rifle.The M16A1 improvements include a bolt-assist, chrome plated bore and a new 30-round magazine. In 1983, the USMC adopted the M16A2 rifle and the U.S. Army adopted it in 1986. The M16A2 fires the improved 5.56×45mm NATO (M855/SS109) cartridge and has a new adjustable rear sight, case deflector, heavy barrel, improved handguard, pistol grip and buttstock, as well as a semi-auto and three-round burst only fire selector. Adopted in 1998, the M16A4 is the fourth generation of the M16 series. It is equipped with a removable carrying handle and Picatinny rail for mounting optics and other ancillary devices.

The M16 has also been widely adopted by other militaries around the world. Total worldwide production of M16s has been approximately 8 million, making it the most-produced firearm of its 5.56 mm caliber.