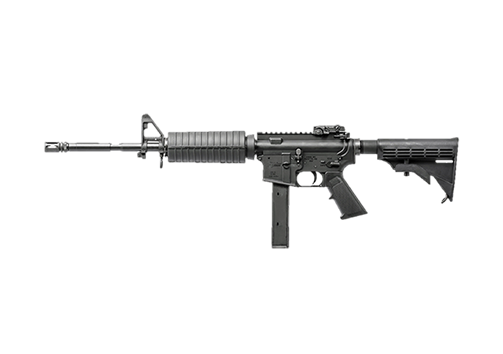 The Colt M4 Commando and M4 CQB is a select-fire weapon chambered in 5.56 NATO. The Colt Commando is one of numerous variants of the Colt Automatic Rifle-15 (CAR-15). It is very similar to the M16A2 assault rifle and the M4 Carbine, but utilizes a scaled down barrel, buttstock, and its overall length is greatly reduced. Colt actually classifies it as a submachine gun.

A new gun to the Commando brand is the M4 CQB, which actually has a shorter barrel than the original. It uses a 10.3-inch barrel.

Originally produced by Colt beginning in 1965 as a variant of the M16, the M4 Commando was manufactured in large numbers as a result of purchase orders from the US Military. Very similar in design to the M16 and other CAR-15 rifles, the M4 Commando’s small size is ideal for close-quarter combat.

Known for its maneuverability and versatility, the M4 Commando employs a gas-operated feeding system in which pressurized gas released from the firing of an individual round is cycled through a tube and used to drive the bolt rearward to both eject the spent casing and the chamber a new round. Unique to the Commando is its exclusion of a conventional operating rod. In a rotating bolt design, the bolt is cycled manually or with the use of captured pressure from the fired cartridge, locking into place between firings with the use of lugs.

The M4 Commando features an 11.5″ barrel, which puts its overall length at 30″. The Commando includes a sliding four-position buttstock. An ejection port cover protects the chamber from dust, while the barrel configuration allows launching of all standard rifle grenades. The Commando is designed to be field stripped without the need for tools, an inclusion that achieves easy cleaning and maintenance.

Additional features include a cartridge case deflector for easy right and left-handed operation, and a muzzle compensator for reduced muzzle climb. A flat top receiver with a Picatinny rail allows for easy mounting of a removable carry handle, optics, or other accessories.