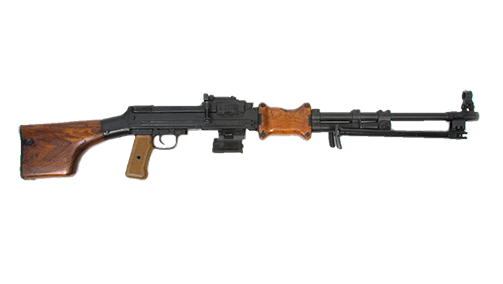 The RPD (Russian: ручной пулемёт Дегтярёва Ruchnoy Pulemyot Degtyaryova, English: Degtyaryov hand-held machine gun) is a 7.62mm light machine gun developed in the Soviet Union by Vasily Degtyaryov for the intermediate 7.62×39mm M43 cartridge. It was created as a replacement for the DP machine gun chambered for the 7.62×54mmR round. It is a precursor of most squad automatic weapons.[1] It was succeeded in Soviet service by the RPK.

The RPD is an automatic weapon using a gas-operated long stroke piston system and a locking system recycled from previous Degtyaryov small arms, consisting of a pair of hinged flaps set in recesses on each side of the receiver. The movement of these flaps and the resulting locking and unlocking action is controlled by carefully angled surfaces on the bolt carrier assembly. The weapon fires from an open bolt.

The RPD is hammer fired from an open bolt, the hammer forming part of the rear of the bolt carrier (which is connected to the gas piston), which continues moving forward for a short distance after the round is chambered and the bolt locked, the hammer face then striking the rear of the free floating firing pin which passes through the length of the bolt. Locking occurs by means of lateral flaps located along the sides of the bolt, which are forced outwards (by the angled sides of the hammer) into recesses cut into the receiver body, after which firing occurs when the face of the hammer strikes the rear of the firing pin; the mechanism is simple, rugged and reliable, It features a trigger mechanism that is limited to fully automatic fire only. The bolt is equipped with a spring-loaded casing extraction system and a fixed insert inside the receiver housing which passes between the feed horns of the bolt serves as the ejector. Spent cartridge casings are ejected downward through an opening in the bolt carrier and receiver. The RPD has a manually operated lever-type safety mechanism that secures the weapon against accidental firing by blocking the bolt catch when engaged. Unlike Degtyarov’s earlier firearm patents, the RPD’s return spring is located inside the butt. Like many other rugged Russian-made firearms, the chamber and bore are chrome-lined, greatly decreasing the risk of corrosion and jamming.
The weapon has a non-removable barrel with a 3-position gas adjustment valve used to control the performance of the gas system. It is also equipped with a folding integral bipod, wooden shoulder stock, foregrip and pistol grip. The firearm strips down into the following major groups: the receiver and barrel, bolt, bolt carrier, feed tray and feed cover, the recoil mechanism and the trigger group and stock.