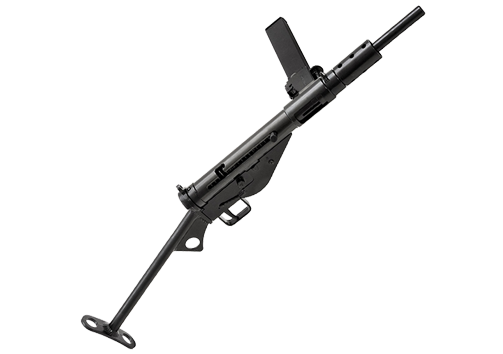 The STEN (or Sten gun) was a family of British submachine guns chambered in 9×19mm and used extensively by British and Commonwealth forces throughout World War II and the Korean War. They were notable for having a simple design and very low production cost making them effective insurgency weapons for resistance groups.

STEN is an acronym, from the names of the weapon’s chief designers, Major Reginald V. Shepherd and Harold Turpin, and EN for Enfield. Over four million Stens in various versions were made in the 1940s.

The Sten was a blowback-operated submachine gun firing from an open bolt with a fixed firing pin on the face of the bolt. This means the bolt remains to the rear when the weapon is cocked, and on pulling the trigger the bolt flies forward under spring pressure, stripping the round from the magazine, chambering it and firing the weapon all in the same movement. There is no breech locking mechanism, the rearward movement of the bolt caused by the recoil impulse is arrested only by the mainspring and the bolt’s inertia. The basic operating principles were similar to those of the German MP40, Russian PPSh-41, US M3 submachine gun and numerous other designs. These shared similar attributes and faults; they were simple and cheap to manufacture, and put an automatic weapon into the hands of soldiers, greatly increasing the short-range firepower of the infantry, especially when the main infantry weapon was a bolt-action rifle capable of only around 15 rounds per minute and not suited for short-range combat. However, the open-bolt firing and use of pistol ammunition severely restricted accuracy, with an effective range of around 100m.

Stoppages could occur due to a variety of problems: some as a result of poor maintenance, while others were particular to the Sten. Carbon buildup on the face of the breech or debris in the bolt raceway could cause a failure to fire, while a dirty chamber could cause a failure to feed. Firing the Sten by grasping the magazine with the supporting hand tended to wear the magazine catch, altering the angle of feed and causing a failure to feed – the correct method of holding the weapon was as with a rifle, the left hand cradling the fore piece, as per the picture of Winston Churchill firing one below.

Additional problems stemmed from the Sten’s magazine, which was a direct copy of the one used in the German MP-38, originally in order to facilitate the use of German 9 mm magazines.[6] Unfortunately, this decision necessarily incorporated the Erma magazine’s faults in the process. The magazine had two columns of 9 mm cartridges in a staggered arrangement, merging at the top to form a single column. While other staggered magazines, such as the Thompson, fed from both the left and right side alternately (double-column, double feed), the Sten magazine, like the MP38, required the cartridges to gradually merge at the top of the magazine to form a single column (double column, single feed). As a consequence, any dirt or foreign matter in this taper area could cause feed malfunctions. Additionally, the walls of the magazine lip had to endure the full stresses of the rounds being pushed in by the spring. This, along with rough handling could result in deformation of the magazine lips (which required a precise 8° feed angle to operate), resulting in misfeeding and a failure to fire.

Modern 9 mm magazines, such as those used by the Sterling SMG, are curved and feed both sides to avoid this problem. If a Sten failed to feed due to jammed cartridges in the magazine, standard practice to clear it was as follows: remove magazine from Sten, tap the base of the magazine against the knee, re-insert magazine in Sten, then recocking the weapon and firing again as normal.[5] To facilitate easier loading when attempting to push the cartridges down to insert the next one, a magazine filler tool was developed and formed part of the weapon’s kit.

The slot on the side of the body where the cocking knob ran was also a target of criticism, as the long opening could allow foreign objects to enter. On the other hand, a beneficial side-effect of the Sten’s minimalist design was that it would fire without any lubrication. This proved useful in desert environments such as the Western Desert Campaign, where oil attracted and retained dust and sand.

The open bolt design combined with cheap manufacture and rudimentary safety devices also meant the weapon was prone to accidental discharges, which proved hazardous. A simple safety could be engaged while the bolt was in the rearwards (cocked) position. However, if a Sten with a loaded magazine, with the bolt in the closed position, was dropped or the butt was knocked against the ground, the bolt could move far enough rearward to pick up a round (but not far enough to be engaged by the trigger mechanism) and the spring pressure could be enough to chamber and fire the round. The Mk 4 cocking handle was designed to prevent this by enabling the bolt to be locked in its forward position, thereby immobilising it. Wear and manufacturing tolerances could render these safety devices ineffective.