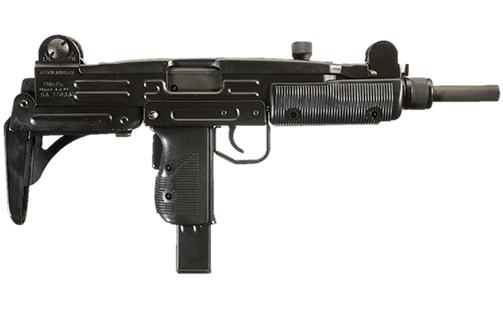 The Uzi (Hebrew: עוזי‎‎, officially cased as UZI) is a family of Israeli open-bolt, blowback-operated submachine guns. Smaller variants are considered to be machine pistols. The Uzi was one of the first weapons to use a telescoping bolt design which allows the magazine to be housed in the pistol grip for a shorter weapon.

The first Uzi submachine gun was designed by Major Uziel Gal in the late 1940s. The prototype was finished in 1950. First introduced to IDF special forces in 1954, the weapon was placed into general issue two years later. The Uzi has found use as a personal defense weapon by rear-echelon troops, officers, artillery troops and tankers, as well as a frontline weapon by elite light infantry assault forces.

The Uzi has been exported to over 90 countries. Over its service lifetime, it has been manufactured by Israel Military Industries, FN Herstal, and other manufacturers. From the 1960s through the 1980s, more Uzi submachine guns were sold to more military, law enforcement and security markets than any other submachine gun ever made.

The Uzi uses an open-bolt, blowback-operated design, technology quite similar to the Japanese Experimental Model 2 submachine gun series and the Jaroslav Holeček-designed Czech ZK 476 (prototype only) and the production Sa 23, Sa 24, Sa 25, and Sa 26 series of submachineguns. The open bolt design exposes the breech end of the barrel, and improves cooling during periods of continuous fire. However, it means that since the bolt is held to the rear when cocked, the receiver is more susceptible to contamination from sand and dirt. It uses a telescoping bolt design, in which the bolt wraps around the breech end of the barrel. This allows the barrel to be moved far back into the receiver and the magazine to be housed in the pistol grip, allowing for a heavier, slower-firing bolt in a shorter, better-balanced weapon.

The weapon is constructed primarily from stamped sheet metal, making it less expensive per unit to manufacture than an equivalent design machined from forgings. With relatively few moving parts, the Uzi is easy to strip for maintenance or repair. The magazine is housed within the pistol grip, allowing for intuitive and easy reloading in dark or difficult conditions, under the principle of “hand finds hand”. The pistol grip is fitted with a grip safety, making it difficult to fire accidentally. However, the protruding vertical magazine makes the gun awkward to fire when prone. The Uzi features a bayonet lug.